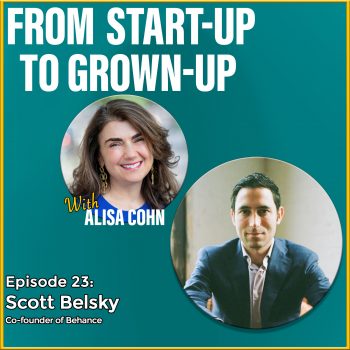 Episode 23 – Scott Belsky, Behance Scott Belsky is an executive, entrepreneur, author, and investor (and all-around product obsessive). He currently serves as Adobe’s Chief Product Officer and Executive Vice President, Creative Cloud. Scott’s passion is to make the creative world more productive, connected, and adaptive to new technologies.  Scott co-founded Behance in 2006, and served as CEO until Adobe acquired Behance in 2012. Millions of people use Behance to display their portfolios, as well as track and find top talent across the creative industries. After Behance’s acquisition, Scott helped kick off Creative Cloud’s services and reboot Adobe’s mobile product strategy and led Behance until 2016, when he spent a few years as an investor and advisor to multiple businesses.  Alongside his role at Adobe, Scott actively advises and invests in businesses that cross the intersection of technology and design – and help empower people. He is/was an early advisor and investor in Pinterest, Uber, sweetgreen, Carta, Cheddar, Flexport, Airtable, OpenSea, Ramp, Ro, and Periscope (now part of Twitter) as well as several others in the early stages. Scott is also the author of the international bestselling books Making Ideas Happen and The Messy Middle. We cover so much ground in this conversation, including how he knows when he can trust an executive, why he sees company culture as an immune system, and why it’s important to extinguish most new ideas. To stay up to date on future episodes and learn more from Alisa, sign up for her newsletter! Learn more about Scott BelskyFor more stories and advice on founders and CEOs, head to alisacohn.com Listen on: Apple Podcasts Spotify Podcasts Overcast Podcasts