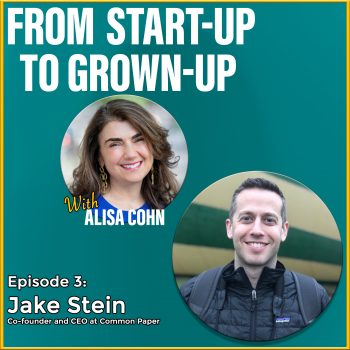 Jake Stein is cofounder and CEO of Common Paper. Stitch. Previously, he was cofounder of RJMetrics (acquired by Magento, then Adobe) and Stitch (acquired by Talend). Before RJMetrics, Jake worked in venture capital, started a landscaping business in high school, and was the 44th ranked table tennis player under 21 in New Jersey; achievements of which he is equally proud.

In this episode, Jake discusses the pros and cons of distributed teams, the questions that he and his co-founder asked before they started their company, and the challenges he ran into once his former company was acquired. You’ll also hear Jake’s biggest mistake, how he invites company feedback parties, and all about Whale Wednesdays.

[01:27] Jake grew up in Monfils, New Jersey, a small town that resembled a New York suburb. Perhaps the landscaping firm gave Jake the first hint that entrepreneurship was in his destiny. He gathered a few of his pals and worked on lawns and other projects for residents in their town.

[03:32] Jake realized he wasn’t good at it, and it hadn’t even occurred to him. In the beginning, he didn’t comprehend that one-on-one interactions were what you were meant to accomplish. In general, it was about being a successful manager, getting the team on the same page, a.nd aligning the company plan and product.

[05:30] A board member named Chuck urged Jake to ensure the staff was on the same page. He shared his knowledge, which Jake needed years to apply and absorb fully.

[11:33] Managing Jake’s psyche has been difficult for him, and while he has improved, it remains difficult. Starting and running a business can be emotionally draining.

[28:03] Jake is well aware that written feedback is far superior to verbal feedback. He writes it down and often rehearses it once or twice to deliver constructive criticism or have a difficult task.

[33:23] At first, Jake had no idea what building culture was all about. He soon realized that perhaps it’s simply being a decent person, not being harsh, and not firing people for no reason, and that was his next iteration of cultural knowledge. Jake believed that it was also his role to be an ear and a shoulder when soothing an employee or a coworker, but this only exacerbated the problem. He then decided that the only culture he wanted to foster was when both parties could talk things out.

[45:36] Jake’s biggest professional blunder led up to a layoff at RJ, which resulted in around a quarter of the team being laid off.

[58:05] Jake wished he had known about meditation and cognitive behavioral therapy for sleeplessness when he was younger. Those are the items that have been most effective in controlling his psychology and stress-related insomnia.

[58:51] Jake has some suggestions for new business owners: Go for it. Consider a startup’s phases to be discrete rather than continuous. The things you need to do on day one are frequently vastly different from the things that make sense once you’ve proven the first thing and are ready to move on to the second. Be more detailed and granular about those various stages and what you should be doing within those multiple stages, realizing that our success criteria need to change. It’s time to rethink how you measure success.