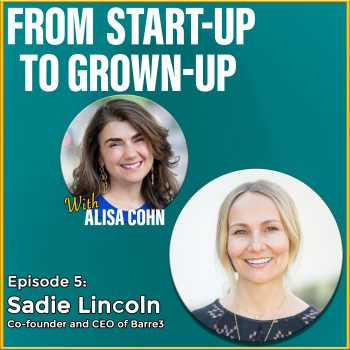 Sadie Lincoln is the co-founder and CEO of the fitness franchise company, Barre3.

Sadie is on Inc.’s Female Founders 100 list and the MO100 Impact list, has been featured on NPR’s How I Built This, and speaks regularly on the topics of mindful leadership, the power of body wisdom, and the movement to redefine what success in fitness means. Beyond running her company and being a global spokesperson, Sadie still enjoys teaching barre3 classes to many of her founding clients in her hometown of Portland, Oregon.

In this episode, Sadie shares how their in-person business had to pivot during the pandemic, why she views running her business as a spiritual practice, the worst feedback she ever received, and the importance of having the right team around her.

Building business was a spiritual practice

[4:06] Growing your own business is such a test over and over of core values because so many external forces can pull you out and away from them. If you use business as a conscious way to anchor yourself back to your core values, make hard decisions like taking a financial hit to uphold your core value, that is a spiritual practice. That’s building a business based on your spirit. Sadie’s definition of spirituality is being close to oneself, God, and her values.

Micro practices that bring her closer to her spiritual practices

[5:14] A lot of it is a practice of being self-aware. In 13 years, Sadie learned different traits or attributes that weren’t healthy, that weren’t a good way to lead, like interrupting or switching tasks quickly when the team needs one direction to go. And so just being aware of it with compassion without shame, none of us are perfect, and just observing it, just kind of noticing it at the moment, is a spiritual practice because it’s a practice of understanding yourself with compassion and love, no shame, and then working towards a more whole place.

Shifting into a more confident state

[7:46] If they’re aligned humans that truly care about empowering women and trying business a new way, that’s the easy part.

The founding story of Barre3

[9:45] They started gathering in their first studio in Portland, Oregon, in their pearl district. They opened their studio, and it was a culmination of many years of experience for Sadie in group exercise in fitness, but also scratching their itch and solving a problem that they were directly experiencing and witnessing in the fitness industry.

[12:20] Sadie wants to create an environment where women support women. She wants it to be beat-driven because energy creates neuroscience in the brain. When we move in sync, we’ll feel closer. So it’s something they celebrate versus something someone does when they’re lazy or not good enough. Sadie just had all these ideas, and they put them together and started their first exercise program. Barre3 in the pearl district just kind of blew up from there.

[16:39] They started their online streaming product in 2011, and it was a ride-along with their studio business. When all of the studios were closed overnight, their digital business grew 100% year over year within a month. They decided to allow all of their owners to open up their digital studio on Zoom, which is less premium less remarkable.

[20:13] Sadie learned the power of taking the time to find a team to surround herself with who can block and tackle so that she could focus on her unique strengths.

A circle in Sadie’s leadership group

[33:26] The best way to describe it is their instructor training, and it is why they’re as strong as they are. It’s like the foundation of their success. When you practice making decisions for yourself, standing up for yourself, and kind of living out loud that way while people kind of witness you in a way, it builds a sense of “I belong. I’m seen, I’m heard, I matter, and I enjoy growing.” It creates a growth mindset. Sadie believes that that investment in that conversation is why their instructors stay so long with them, why their clients come four times a week, which is three times the industry average because they care about the whole person. And the practice of that is sitting in a circle.

[37:41] Sadie’s suggestion for all leaders is to make sure that you have a diverse group around you, back to diversity, equity, and inclusion. Because we all have different, important, and impactful voices around that table creating innovation, our ability to attract a broader audience keeps that audience pushing things forward. Not to be legacy-based, but to start thinking into the future. When we do that, business thrives.

What else does Sadie wish she had known earlier on her journey?

[39:55] It was to truly believe that she deserved to recruit and keep her dream team, people outside of BArre3 who could look in and believe in what they’re doing and trust that if she can find people that block and tackle that, she’s enough as she is, she doesn’t have to be anything other than she is. Sadie wishes that she could go back and give that younger woman that kind of confidence to keep her standards high. And find people who are devoted to those high standards.

[41:04] Practice self-compassion. When you’re faced with criticism, defeat, fatigue, and curveballs, that’s what running your own business is, and it doesn’t go away. The only thing you can control as a founder is your discipline of learning to cope with that quicker.

Sadie Lincoln is the co-founder and CEO of barre3, a fitness company focused on teaching people to be balanced in body and empowered from within. Starting in 2008 with the flagship studio in Portland, Oregon, barre3 has grown to include more than 170 franchise studios powered by female entrepreneurs, plus an online-workout streaming-subscriber base in 98+ countries. What started as a workout has blossomed into a full-blown movement made up of millions of people focused on body positivity, being empowered, and redefining what success in fitness means.

Go to https://barre3.com/ to learn more about Sadie’s business.