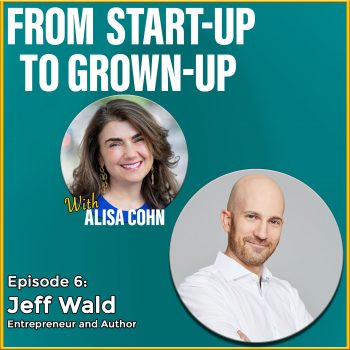 Jeff is the author of the #1 Amazon Best Seller, The End of Jobs: The Rise of On-Demand Workers and Agile Corporations and The Birthday Rules: A Fun and Flexible Framework for Raising Children in a Technology Enabled World.

He is also the co-founder and Chairman of two new technology startups, Bento Engine (toolkit for financial advisers) and Sonero (AI tool that provides summaries and action items from meetings).  Jeff’s previous company, Work Market, an enterprise software platform that enables companies to manage freelancers was acquired by ADP in 2018, where he served on the Senior Leadership Team until 2020.  Mr. Wald has founded several other technology companies, including Spinback, a social sharing platform (eventually purchased by salesforce.com). He began his career in finance, serving as Managing Director at activist hedge fund Barington Capital Group, a Vice President at venture capital firm GlenRock and various roles in the M&A Group at JP Morgan.

In this episode, Jeff talks about cofounder drama, his depression when his first startup failed, and what he said to his investors when they told him to get a coach, frameworks, and what he now looks for as an investor.

[02:48] Jeff used to sell lemonades and spams, but with some buddies, he founded a sports newspaper that publishes once a week. They deliver newspapers to people’s homes while riding their bikes around town. When he first started at JP Morgan, he worked with a lab group called Lab Morgan. They were tasked with figuring out how to innovate and lead investors in a business called Capital IQ.

[04:21] Jeff worked as a venture investor for a few years and has funded many companies. He met another Jeff, and the two talked about industries, trends, the competitive climate, and firms to invest in. It was around 2003-2004, discussing information technology maintenance.

[08:03] When Jeff stepped in and shut the company down and conveyed it to several employees, he also experienced a deep type of trauma. He urged everyone to go home because the company was in the process of going bankrupt. He returned to his flat and stayed there for a month.

[13:44] We all go through life believing that we must be strong enough to get through it, and we also think that asking for assistance is a show of weakness. When Jeff was an officer in the New York Police Department, he learned that asking for aid was not a show of weakness. He realized that if even the bravest members of the police need assistance, why can’t ordinary individuals do the same?

[16:27] Jeff was unaware he was an adult due to his various immaturities. It was his worry about proving himself, knowledgeable or capable. Jeff was obliged to say yes when one of his investors advised that he required a coach because the investor wouldn’t put his money in until Jeff had a coach first.

[20:37] Jonathan aided Jeff in becoming a better manager, leader, and person in general. He assisted Jeff in recognizing the things and areas in which he was unproductive and inept. He was able to gain a clear understanding of the areas that required his attention to grow.

[27:33] Jeff was a workaholic who lived for the company, and he believes that your viewpoint and caring are your most valuable assets as an entrepreneur. No amount of everyday tasks will allow you to take a step back and have an “aha” moment.

[30:49] If your board has taken the time to gather information, you should listen. If you spend an entire board meeting explaining what you do, people won’t understand if you share experiences or give recommendations. Analogies can fail in many ways. However, something in that story may catch your attention and make you want to learn more. Experience sharing, Jeff constantly listens to experience shares but advises given he nearly completely dismisses and doesn’t think about since he doesn’t comprehend the full context.

[37:28] Through lifelines, trust is developed within the forum.  You provide the Lifeline, and everyone else shares it. The Lifeline is roughly an hour-long examination of your life. You examine all of the areas you are vulnerable, ashamed of your uncertainties and concerns, as well as your triumphs. However, expressing that vulnerability is a highly effective strategy to create trust.

[42:18] There’s a fine line between being vulnerable and trustworthy. Nobody wants to follow a grumpy or insecure person who refuses or is frightened to accomplish certain things. You can express your fears and worries, but ultimately you must make a decision and lead that team.

[43:14] You must show strength and qualities that entice others to follow you. You must be able to paint the route for your team, outlining how you plan to get there and what you will do if you can’t lead them. Knowing your strengths, your zone of awesomeness, or what you’re strong at and desire to accomplish every day.

[45:05] Jeff’s prior achievements played a role in this. It would be a more fruitful trip for Jeff if he arrived at these conclusions through a combination of hard effort, counseling, forum discussions, coaching, and reflection.

[47:28] Jeff’s imposter syndrome continues to express itself in his fifth startup. Does he have these pessimistic notions, such as what if this one fails? Are people going to believe the second incident was a fluke? However, everything is at the back of his mind at the moment. It used to be front and center, which made him feel weird and uneasy since he believed others saw right through him.

[55:23] One of the things Jeff will advise founders on is the importance of always thinking about your goal and how you’re going to accomplish it. If your objective is to sell something, you should determine who your potential buyers are. If you are not on their radar and do not org your way into the heads of corporate development and strategy at those various firms, you are simply not boosting your chances of success.

[01:03:38] If you’re going to speak in public, you better have a coherent, reasonable, and defendable argument. History, data, and how firms genuinely engage their people are essential factors in forecasting the future of work. You won’t be 100% accurate unless you look through those lenses, but you can provide a notion, a projection, or a statistic that has a good chance of being correct.

[01:07:57] Jeff frequently wishes he could visit his past self and tell him, “it’s going to be okay.” In retrospect, he recognized that insecurities, burdens, and expectations plagued his former self. Jeff wishes he had known early on that it is acceptable to fail and that failure will not define you as long as you continue to move forward. Perseverance is the key to success, and it was the one factor that bolstered Jeff’s path to success, as he was willing to do the work necessary to ensure the job was completed.