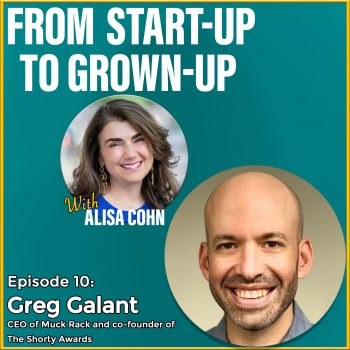 Gregory Galant is the co-founder and CEO of Muck Rack, a platform enabling PR teams to work together to find the right journalists for their stories, send customized pitches, build meaningful relationships with the media, monitor news and quantify their impact. It’s used by thousands of organizations, including Taco Bell, Pfizer, Golin, International Committee of the Red Cross, Knight Foundation, Kauffman Foundation and Penguin Random House. Muck Rack is also the solution of choice for journalists, who use Muck Rack’s free, automatically updated portfolios to showcase their work and provide information about what stories they’re looking for.

In this episode, Greg shares why he decided to bootstrap instead of taking VC money, the constant state of change his job is as a CEO, and why he’s become grateful to sit around and be bored.

[1:33] Back during the 90s, when it was only the start of website making, Greg was able to figure out how you could make one. It was that time that it occurred to him that he could ask around businesses whether they were interested in having a website. At first, they questioned Greg’s abilities, and some of them didn’t even know what a website was. Fortunately, Greg could still have clients like a local newspaper chain, a French philosopher, a clinical trial company, and many more.

[3:22] Greg got into the social media world in 2005 when he established his podcast. At the time, not everyone is familiar with what a podcast is. He first started interviewing various entrepreneurs like Reid Hoffman, Founder of LinkedIn. He also questioned the founder of Yelp and the Vanguard group.

[4:21] Greg signed up into Twitter early, and he was able to take the name ‘Gregory’ as no one has taken it yet. During this time, great stuff was happening, but it was hard to know where to focus. Then they had the idea to crowdsource who the best person on Twitter by voting. His co-founder Lee Semel and him had the idea to launch a Twitter voting system and call it an award. As tweets are short, they ended up calling it ‘The Shorty Awards.’ Within 24 hours of its launch, it went viral. It became a top trending term on Twitter, and they got interviewed with a variety of journals and press.

[5:36] Greg had a realization with the journalists as he saw them struggle to uncover the awards. It led to them launching the first version of Muck Rack, where they found all the journals in one place. It became popular with the journalists, and they were tons of requests to get listed on the website.

[11:04] Greg contorts its identity around its business, but he does this less now, although he was doing it during the early days. When his idea doesn’t go the way he planned it, he has difficulty detaching from it.

[13:01] Greg has learned that you don’t just make it work as an entrepreneur. You test assumptions in the marketplace, and if it ends up wrong, it doesn’t mean that you are a terrible entrepreneur, and you have to tweak the idea to fit in the market.

Downsides on the Decisions Made

[19:39] One of the most significant downsides that Greg mentioned is all about executives. He said that it was hard to fire executives. Greg personally had struggles with the company, and he prepared financial projections even though he doesn’t have any financial background. Only the last few years ago, they could hire a CFO as they already afford it.

[22:36] As they didn’t have any VC money to use, Greg was forced to grow a lot slower. During this time, it gave them time to develop further. Most of their sales came inbound and through word of mouth. Their reputation to people built slowly, but they could still survive.

Greg’s Journey as a Leader

[24:38] Greg underwent several different phases as a leader. The first one was learning how to manage people when they were starting. At the time, his mindset was everyone is like him, an entrepreneurial mindset, which makes him question why someone would want to be an employee instead of building their own business.

[25:40] They hired people out of college and trained them early as they had no resources to hire experienced people. When they started to employ experienced leaders, they gave them a room and did not immediately assume that they knew better than them. When different departments were formed, it required a different leadership style.

[28:28] Greg believes that his learning style evolved into a coaching mindset compared to before. He feels superior above everyone else and knows everything better than anyone else. Currently, each department has its head who knows all the necessary information and will report to him.

What Greg Felt When He Gave Way

[33:00] At some point in the business, Greg gave way and hired experts on his workload. Greg always felt the adrenaline rush when he was still handling the process inside the company. Greg had this sense of satisfaction. He now works on running department reports and doing team meetings. Sometimes he feels unsatisfied doing this kind of work.

[36:26] Greg suggested finding hobbies like cycling or traveling to overcome this dissatisfaction. He was also particular about not working on weekends. It would be best if you took the time to think about what’s happening to your business. Even not working on every step of the process, your business is doing great without jumping in, which is good.

[40:13] Greg never sets a kind of formal goal. He seeks out businesses bigger than him and learns from them. Sometimes they also exchange ideas which offer a lot of learning opportunities.

[42:27] Greg created and signed a pledge regarding working remotely forever, and other companies joined them as well.

[44:50] When it comes to working remotely, Greg has been advised to manage them by setting up goals with key performance indicators. You should set up a system that monitors the employee’s performance even without being physically present in an office. You could also set up a program that monitors the employee’s screen by screenshotting it and watching how long an employee is spending on a task.

[47:56] Greg believes that their culture is excellent, with no voluntary turnover in the last 12 months. They have been multiplying with a lot of referrals. Greg realized that there are a lot of opportunities in a remote culture. They share metrics in revenues technical and customer decisions on Slack. For team meetings, they do it through zoom.

[52:22] Greg’s strength and weakness as an entrepreneur is an Unbridled Optimism, and it is a weakness as a manager since he’s always optimistic. There was a time when Greg had to fire someone well-liked by people. He wanted to give it a chance; however, that person does things and never does it right. They get overwhelmed by something they shouldn’t. It took him 6-9 months before he could fire him. He even had to ask other people how to fire someone, and it was a great learning experience for him.

[57:56] Greg views himself as a scrappy entrepreneur. He had dreams that the company was huge and continuously growing, but at the same time, he had doubts if it was ever going to happen. Aside from that, he sometimes thinks that he can increase the company and hire a different CEO after it grows.

[58:53] Greg also thinks that he’s terrible at negotiating, but he improved in dealing as time went by. He also discovered that he was awful, having no experience when starting, but Greg realized he could improve later.

[1:01:05] Greg mentioned that journaling helped him a lot to cope with negative emotions. Aside from that, he has also joined a peer forum. In this forum, you’re not allowed to give advice, and what you have to do is update what’s happening in your business and your family and personal lives. Greg also advises having a coach helps in coping with the issue.

[1:07:42] In your entrepreneurial journey, you will learn a lot. Sometimes it takes a while, so you should make sure you have the patience for it. Greg encourages people not to focus on the money but on building their business. Determine the capital structure needed, think of how long the journey would be, know your business’s investors, and a lot more.

Learn more about Gregory Galant on his website: http://galant.org/ and check out Muck Rack and The Shorty Awards.