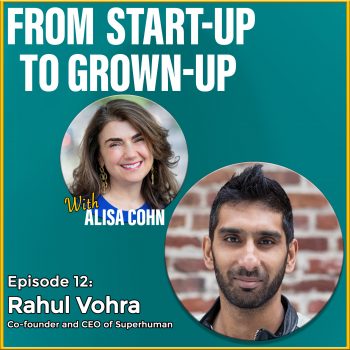 Rahul Vohra is the Co-Founder and CEO of Superhuman.

He is also a Technical Advisor at Boldstart Ventures, an investor and advisor at Partender, and an investor of sendwithus and Easy Post. He received his bachelor of arts in Computer Science at the University of Cambridge.

Rahul shares the lessons he learned from being a serial entrepreneur, how and why he learned to meditate, what he does to build trust with his team, and the pros and cons of being a celebrity founder.

[1:41] Rahul plays narrative games because it provides case studies and tells extraordinary stories. Currently, he is playing Borderlands 3, which is quite different from what he usually plays, but it still provides an excellent case study on its game design.

[2:36] Rahul finds it attractive that the game makes you face different difficulty levels depending on your player level, and it has a personalized flow depending on the player.

[3:57] Before Rapportive, Mojo was established. They figured out an effective way for equity crowdfunding that worked with EU legislation during these times. The most remarkable thing about Mojo was its domain, but it has its side effect of dropping off from the internet now and then. One of Rahul’s lessons is getting your own.com domain. Aside from that, he learned that he was a better fit as a CEO rather than any other role.

[5:38] Someone who has Founder/CEO skills and experiences is a better fit as a Founder/CEO than an employee.

[6:48] Rahul is the kind of person that will beat himself up for failure. If he could go back and give advice to himself, he would say that he should have a strategy and stick to it. Aside from that, Rahul should also raise one (1) round ahead of traction and think big. Lastly, he said that he should be taking care of himself.

Motivation and Driving Power of Rahul

[8:07] Rahul thinks that what’s driving him is the joy and satisfaction that the customers bring if they are satisfied with the services, the refusal to fail, the realization of everything he’s done due to the opportunity he has gotten. He also had a realization that his team was phenomenal.

[10:02] When Rahul sold Rapportive, they were tired as they were working so hard that he had already caused irreparable damage to himself, and he even spent a week in the hospital due to a hiatal hernia. It is the reason why when they got the offer from LinkedIn, they took the opportunity and sold the company.

[17:32] Rahul is also working with a CEO coach just this year. He had a realization that mindsets need constant training and nourishment. CEO Coaches are familiar with the trials and tribulations of being a CEO which will help a lot. They can help in helping him figure out what must be done.

[20:39] The name of Rahul’s CEO coach is Darren Gold. The first few sessions they had were all about founder mentality. After the first few sessions, Darren observed that Rahul has an archetypal representation of the kind of founder at the deepest level that operates because of fear of death. Rahul thinks that he was able to pinpoint it accurately. After, they are now dealing with its implications and how to accept the idea of a finite life.

[26:06] Rahul takes feedback in three (3) different ways. The first one is running pulse surveys in the organization, and it allows the employees to give feedback anonymously. Any leader should care about getting feedback from people to see how they view you as a leader and how satisfied and challenged they are. The second way is simply asking for the feedback itself. It can either happen one on one, by group, by staff, team, and a lot more. The third one is Rahul running board meetings every six weeks. He also receives backchannel feedback.

[30:54] Every time Rahul gets feedback, he gets second and third opinions from outside experts. It is to make sure what they are saying to you is unbiased. You should avoid talking to people who will say things to you because it is what you want to hear.

[31:56] Doing a lot of social engagements can help in building up trust. Sometimes, you will cause misunderstanding due to a lack of confidence. In Rahul’s case, he tries his best to establish trust with every employee. The foundation of trust helps avoid misunderstanding in how you talk to people.

[35:22] Rahul sometimes becomes defensive in these situations, and he will sometimes try to explain himself. However, he would realize that it doesn’t matter, and you have to accept what happened and reflect on it to try and make a better working environment for the both of you.

Change of Mindset as a Leader

[38:29] It is essential to look for candidates that fit its values when it comes to hiring. Core values must be maintained more intensely than 99% of other companies, and they should be held even if it would be detrimental to your company. Superhuman’s core values create delight, be intentional, and have remarkable quality.

Is there a Downside about Waiting so Long to Launch?

[44:12] Rahul doesn’t think there’s a downside to waiting, and he finds it significantly better to onboard customers at a measured but increasing pace every week. In that way, you’ll still be able to fix any issues they may find, and you can focus on making them happy.

[46:34] Rahul was looking for a notion of product-market fit before doing the big launch. It’s one of the reasons why a startup succeeds. Without it, it will fail. If a product-market fit is not happening, you will feel it. Customers aren’t growing that fast, the news about it is not spreading, and a lot more. You can also feel it when it is happening. Customers are buying as fast as you can, hiring sales and reports, reporters calling you, investors wanting to invest, and money piling up to your account.

The Challenges of Change

[51:52] The most challenging change they faced happened after raising their series B. Instead of hiring a specialist, they tried to figure it out themselves. Founders need to hire experts, executives, and people who have worked on a team before, and that’s a fundamental mindset for founders.

[52:59] When they encountered this issue, the board told Rahul that he needed to hire an expert, which he always excuses to avoid. He had a shift that he no longer thinks about figuring out himself. Rahul believes that this is one of the problems that founders may encounter.

Advantages and Disadvantages of Being a Celebrity CEO

[56:11] Being well known has its advantage, disadvantage, and side effects. The main upside is credibility, and having an excellent track record convinces people that you have a great chance of success. The next one is making specific channels easier.

[58:03] One of the significant downsides is impersonation and attacks. Some attackers will pretend to be Rahul and scam people. Rahul also mentioned a side effect that involves getting approached randomly in public.

[59:55] Rahul often experiences this, and he says that it is unavoidable. Not experiencing self-doubt may mean that you are overconfident, and Rahul handles it by remembering who he is and his achievements and speaking to his investors.

Advice in Growing as a Leader

Check out Superhuman on https://superhuman.com/