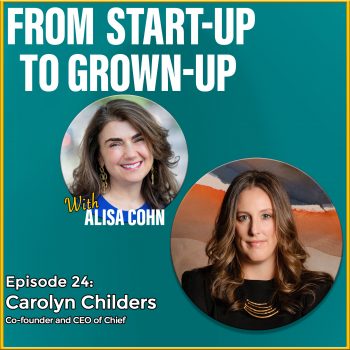 Carolyn Childers is the CEO and Co-Founder of Chief. She is an experienced leader and operator, having successfully scaled several early-stage businesses. Prior to founding Chief, Carolyn was SVP of Operations at Handy. Previously, Carolyn led the launch of the site Soap.com (Quidsi) and acted as its GM through its acquisition by Amazon. Carolyn also had roles at Victoria’s Secret and Avon Products where she worked on strategy and business development. She started her career in finance where she spent over three years in investment banking at Deutsche Bank. Carolyn has an MBA from Harvard Business School and a BS in Finance from Boston College.

I was able to have such a fun interview with Carolyn live at Collision Conference in Toronto this summer! We cover what it’s like to have a successful career and subsequently, the vulnerability one feels becoming a co-founder and CEO. Carolyn discusses the early days of founding Chief with her co-founder and the breakthrough moment they found after that, what it feels like to have so many people not see your vision, and how she learned to be a leader from her background in sports.

To stay up to date on future episodes and learn more from Alisa, sign up for her newsletter.

For more stories and advice on founders and CEOs, head to alisacohn.com