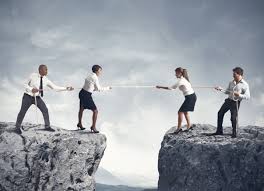 How to have a better fight

The benefits of conflict

Sean, the CEO of a fast growing high tech start-up, emailed me to see if we could have an emergency phone call. Now there aren’t that many coaching emergencies, so of course I made time for him immediately. It turns out that he and his leadership team were discussing how to implement their first formal performance appraisal process. As the time approached to fill out the forms and schedule conversations, the found themselves having an argument about the right forms to use and the process for holding the meetings.

After speaking to Sean, I spoke to the members of his leadership staff. I was struck by how upsetting it was for all of them to be engaged in, well, a big fight. They thought that a well-functioning team shouldn’t have this kind of conflict and that somehow they were dysfunctional. It was a first major “moment of truth” (over performance appraisals? Really?) that they had experienced with their team and they were concerned about how they were dealing with it.Each of them – especially Sean who is, after all, the CEO – was frustrated they couldn’t influence each other around to their point of view.

On the other side of influence is conflict. And, sometimes you just have to hash it out. In fact, the CEO and other top leaders should seek out conflict. Your job, after all, is to lead people to a place they’ve never been before, and that is uncomfortable and difficult. If you aren’t getting some conflict, there is probably something wrong.

Here are some ways to help you think about conflict and some practical advice to help you drive a path forward. 1) Embrace conflict. Conflict is a normal, natural part of corporate life and certainly to be expected on any leadership team. Tension is baked into the system. You are constantly grappling with trade-offs and choices: releasing the product quickly versus perfect quality; short-term profits versus long-term strategic growth; balancing local needs versus global scalability. If you don’t have this tension on the surface either you are not making decisions based on rich enough data, or it’s under the surface and people are afraid to challenge each other. Or, worse, you have a group of apathetic people! When you recognize that you have conflict, pause for a moment with an inner smile: this is good.

Sean, in particular, who is known as a charismatic leader, had to swallow hard to accept this. He likes to lead through vision, through “attraction” as he calls it, and certainly through consensus. During the lifecycle of the company so far he and his senior team had agreed on the core issues for the company. It was hard for him to tolerate the fact that there was now profound disagreement. Just getting comfortable with the tension and accepting it as a healthy part of team growth took a major mindset shift.

Practical advice: a) Accept and embrace conflict as good, as expected. When you notice yourself getting uncomfortable, remind yourself that a little conflict won’t screw up good relationships and discomfort won’t kill you. b) Model that for the people around you – you can say things like “I know this might feel like a fight to you all, and it may feel uncomfortable, but let’s keep talking. This is a good discussion.”

2) Pick the right fight. This is about getting to the heart of the matter. In Sean’s case, the team was spending quite a bit of energy arguing about which forms they should use and what the forms should say. Is that what this is really about? It turns out that, of course, it was not about the appraisal forms but about more fundamental issues. (Note: there are few absolutes, but I would suggest that if you are arguing about a form you’re probably not picking a very good fight.)

As Sean and I explored his vehement position, and I talked with the rest of the leadership team, the real issues emerged. Sean is a fierce guardian of his corporate culture. He is also learning to communicate more clearly his expectations, both about job performance and cultural values. He called a time-out to refocus, and when he and the team came back together he framed his points about the performance appraisal forms in the context of cultural values and expectations setting. After spending some tense time on this issue, they began to argue about the business model and cultural philosophy – now this is a fight worth having! (Yes, at some point this conflict does have to get resolved. But don’t try to resolve and contain substantive issues before you spend enough time hashing them out.)

Practical advice: a) Call a time-out when you notice that you are fighting over something which seems petty or does not address the real issue. This allows everyone to think and to cool down. b) When you reconvene, report unemotionally what has happened so far and suggest what you think the deeper issue is. If people want to keep bringing up the original conflict and it gets dragged out again, notice these might be the kind of people who stuck in their positions or need to be right (see below about learning about your team through conflict.) One way or the other keep focusing the discussion on the real issue.

3) Use the conflict to learn. So much learning comes out of conflict if you are not drawn into the drama! When you pay attention it can give you sort of an x-ray of the company that let’s you see what people are about. Sean found out great things about his top team. They are all authentically focused on the betterment of the company and passionately care about people’s development. He also discovered that a few of his leadership team are incredibly squeamish about setting clear expectations and holding people accountable. That’s pretty important to root out and resolve as the company grows rapidly. He also learned that one of his team members is pretty rigid about structure. This is not a fatal flaw, but Sean now knows that he will have to coach this person to be more flexible to help him remain a key member of the leadership team.

Practical advice: a) Debrief conflict personally. What did the interaction tell you about these individuals? What did it illuminate for you about the company and the culture? These are valuable insights for you. b) Debrief conflict with the team. Ask the team the same questions. Doing this helps everyone learn and also normalizes conflict so that the next time you have it – and you will – you will be able to cycle through it more quickly and use it more dynamically.

I would love to hear about your positive (and negative) experiences with conflict!