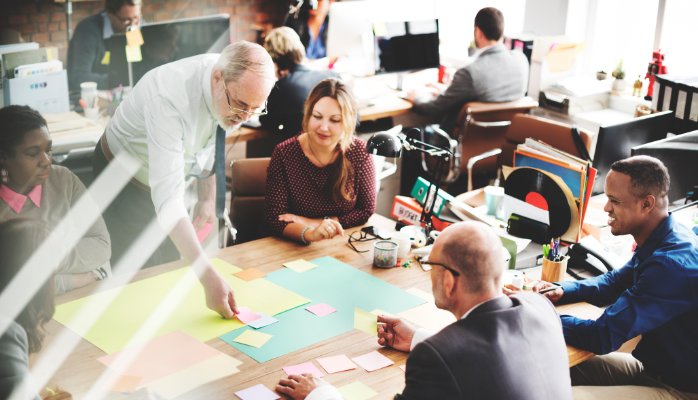 “I wanted this project, but now I keep thinking ‘be careful what you wish for,'” Gerald said. A Vice President in IT at a “big pharma” company, Gerald was the lead on a major new initiative. The CEO wanted to make the culture more transparent and accountable. As a symbol of this, he championed the roll-out of a new goals and performance management system. It would eventually touch every one of the 75,000 people in the company. Unfortunately for Gerald, the first people who would get it were the members of the CEO’s staff. Not an easy group to satisfy.

One great thing about large companies is that they often have formal career paths. Gerald had been talking to his boss for over a year about wanting to become a GM of a division. His boss was supportive. Together they planned out the various experiences that Gerald would need to get there. He had already accomplished some of them, and when this large cross-functional project came out, his manager had fought hard for Gerald to get the leadership role. So here we were.

Gerald is not alone. Often the key to moving up is to lead a large, complicated cross-functional project. The formula for success is this: 1) Build your influence, 2) Root out and resolve political challenges, 3) Exude confidence.

1) Build your influence: When you roll out a large project in a large company, you have plenty of formal structure around you: committees, task forces, councils. There will be many, many slide decks and presentations. Many. Many.

But the real work of getting buy-in for the project is behind the scenes. You may have a big presentation on a Thursday afternoon, but it’s actually the 5 coffee meetings you had Monday through Wednesday that determine your success.

That’s because nobody really decides anything in large meetings or because of the PowerPoint deck you put together. People typically decide before they enter the room. The “meeting before the meeting” is where you can help them shape their thinking, learn about their concerns and build rapport and influence. It’s a critical step.

Gerald understood that from his past experiences, but he had never operated at the level of the CEO’s staff before. He wasn’t sure how to build influence at that level.

Building influence starts with a plan. We drew up a list of the members of the CEO’s staff and discussed them. Gerald realized that he knew 4 of them quite well and felt comfortable reaching out.

Gerald’s boss had a great relationship with an additional 2 or 3. Gerald would ask his manager to ease the way for an informal meeting. Then, through those meetings, Gerald could figure out how best to approach the other members of the staff.

2) Root out and resolve political challenges. Any large-scale, cross-functional project is, um, political. “Politics” come into play when people have different agendas, different points of view, and conflicts of interests. A situation is “political” when it threatens to diminish people’s authority or simply touches their area. And, it means that you have to figure out what politics might get in the way and resolve them before you try to move a project through.

When Gerald made his list of the key people he had to influence, it made him think about the political issues that executives would have with this project. “The head of R&D doesn’t like the benchmarks he’s measured against, so he’s not going to like how much this system exposes them,” he told me. “And the Chief Human Resources Officer thinks this should be an HR initiative, not an IT initiative, so she’s going to be looking for reasons to complain.” One by one he went through the political issues that could come up.

Bringing these to light is the first step in handling them.  You may not be able to resolve them all, but that’s not necessary to be successful. You just have to make progress, especially against the toughest one. Once you start getting traction, others will see signs that the project is going to be successful and will want to go on record as “for it” rather than “against it.”

As a starting point, Gerald thought through how he was going to handle the head of HR. He didn’t know her that well, so he asked a close colleague in HR for his input. The colleague said that the head of HR was a straight shooter. She would not mind giving this project to IT as long as she felt like she was a co-owner and would be asked for her advice. So Gerald asked to meet with her. He told her he wanted her input on which key functions to include in the system. He asked her for a dedicated partner to represent HR, and he gave her a speaking role in his presentation. Almost instantly she started acting like a willing partner rather than someone watching from the sidelines.

3) Exude confidence. Yes, you will have to give multiple presentations. No, your stakeholders will not be persuaded real time by your presentations. Yes, they will take the opportunity to size you up. They will look to see if they think you are someone who can get this big project across the finish line.

Your presentations, therefore, are not about conveying information. They are about creating the perception that you are knowledgeable and capable. When something detracts from that impression, you need to find ways to manage it.

When you go in front of a group of senior leaders for a high-stakes presentation you might be a teensy bit nervous. If you don’t normally spend much time with them, you won’t be able to count on great rapport going in. And if you are leading a project like this for the first time you probably have a lot of gaps in your knowledge. It’s a double whammy that might leave you feeling and acting tentatively. Not the way you want to come across to this audience.

The antidote is to develop confidence. When you have confidence on the inside it emanates outward. When you don’t – and often we don’t – you can develop behaviors that will help you act the part.

Gerald got feedback from his manager that his presentation style was fine when he was on script. As soon as someone asked him a question that he wasn’t prepared for, he appeared thrown, stammering a bit and giving a very long answer. He then had trouble getting back on track. Not the right image to come across as credible.

We worked on this by giving Gerald a behavior to practice: when he got a question, he should pause. He could say “that’s a very good question” or some other filler as he took a moment to think about the key point he wanted to get across. He practiced – we drilled it together and he practiced it in other meetings, even when he didn’t need it. By using that little moment of preparation he got much better at answering questions on the fly and appearing calm and collected. Then he would go back to this presentation.

When you take on any large scale cross-functional project it’s an opportunity to show people you are ready for a bigger role. Use these tools to help you showcase that. I would love to hear how these work for you!

You get it. You need to have the meeting before the meeting to get buy-in for your ideas. But how do you structure them?

Remember that “pre-meetings” (also known as “the meeting before the meeting,” not to be confused with “the meeting after the meeting”) are about engaging people so that you know where they are coming from. And planting some seeds about your own ideas if you need to. If you don’t know someone that well, it’s even more important to have a pre-meeting which will help you enhance the relationship.

Some people feel awkward at the idea of pre-meetings. Here are some ideas to help.

1) Hold regular pre-meetings: Get in the habit of holding regular 1-1s with peers and other key people, inparticular more senior people. When you do this you build rapport, better understand each other, and get what’s important to the other and how each other thinks. This is important background when you need something and don’t have a lot of time to explain it.

2) Listen more than talk: Your agenda is important to you. What do you think is important to them? Their agenda. Listen to their agenda to learn where they are coming from. Even more importantly, that will make them feel heard. And therefore more bonded to you and more willing to support you. Which is the whole point.

3) Make it informal:  Meetings are formal. Pre-meetings are informal. Take them out for coffee or lunch or a drink and frame it as “let’s have a chat.” This helps both of you feel more comfortable

Try these ideas. Do you have any thoughts on pre-meetings? Send me an email to let me know!