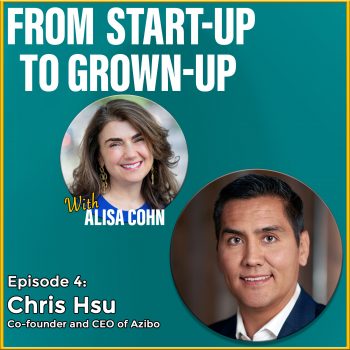 Chris Hsu is the co-founder and CEO of rental property financing company Azibo.

Prior to Azibo, Chris served as an Advisory Partner at a16z and previously was CEO of Micro Focus, a $4B enterprise software company. He also was COO of Hewlett Packard Enterprise, where he successfully led the largest corporate separation in history. Chris spent the earlier part of his career in leadership roles at top consulting firms, including KKR and McKinsey. A military veteran, Chris graduated as a Distinguished Cadet from the United States Military Academy at West Point and completed his U.S. Army tenure as a Captain. He also has an MBA from Northwestern’s Kellogg School of Management.

In this episode, Chris talks about what he learned in ranger school, what he wrote in his first culture document, and a real look into the first few months of building a startup. You’ll also hear about the concept of a “leadership selfie,” and how he overcame all of the initial rejection he received trying to start Azibo.

[1:59] Chris’ father was a refugee who migrated from China to the US. His father’s dream was to go to the United States, but they are financially incapable of doing so. They ended up borrowing money from a family friend and got on a boat as they still couldn’t afford a plane ticket. His father successfully ended up in South Carolina and got a scholarship to Kansas State University.

[3:42] Chris’ has always been asking his father about how they ended up in the US. It was only when he was already an adult that he started talking about it. They wrote a book about it called Faith and Family. The book talked about his life and how he survived due to the help of the people. This was one of Chris’ inspirations in life.

[6:20] Chris grew up thinking that he had a commitment and responsibility to serve so he and his brother got admitted to West Point.

[7:33] There’s a total of four (4) different phases to go to in Ranger School in which you need to pass the phase or else you’ll be repeating it. If you’re lucky, it’ll only take three (3) months to get through what Chris has experienced.

[8:17] Going to Ranger School has been challenging for Chris. He went through a lot. Rangers are the ones who drop behind the enemy line, secure an airfield, cuts enemy supply lines, and a lot more. When Chris was in Ranger School, he lost 35 pounds and even looked so thin. His body wasn’t functioning well and he couldn’t even sleep.

[11:21] Chris learned a lot of whiles being a Ranger. He learned his physical, mental, and emotional limits during his stay, and he learned to take one step a time.

[15:17] Chris has been a real estate investor for 21 years. He loved real estate as a hobby, but he ended up building a career about it.

[19:24] Co-founded companies offer many opportunities, but it was a challenging job to do. Their reputation helped get the door opened and hire a team. Before starting this up altogether, Chris wrote down the nature of the company that he wanted to build and how he wanted to build it.

Culture of the Company that Chris wrote down

[22:02] Chris was able to formulate five (5) key points, which went down to four (4) as they combined two (2) into one (1). He wanted to build a company that prioritizes the needs of its customers. When a customer encounters a problem, they do everything in their power to solve it as soon as possible. The second key point he had written is being an action-oriented innovator. You must work hard to release a product or service suitable for the people. The third element is that they are composed of various individuals that are high performing and talented. The last one talks about being genuine and respectful.

[33:40] Chris didn’t start as a leader immediately. During high school, he was a troubled kid and at the age of 15, he was sent to the disciplinary. This kickstarted his leadership skills as during his stay on the disciplinary, he was involved into leadership stuffs. He took advantage of the fact that everyone in the school knew him and ran for student council which he successfully one on.

The Struggles of Chris in his journey

[37:43] During the company’s early days, Chris found it hard to hire people. They have nothing, so they are selling culture and dreams. In the previous companies Chris has worked for, they didn’t have any problems finding or hiring employees.

[38:57] Chris experienced doubt in the eyes of other people. There was even one time when he was interviewing someone, and they said to him that they don’t think Chris can be responsible in the future. Aside from that, venture capitalists also said the same thing to him.

[41:34] Even though Chris received lots of negative feedback about what he was doing, he didn’t back down. They continued to plan every step in the process of the company.

Chris as a CEO

[46:44] During the early days, Chris was all on his own. He struggled to figure out what things must be done. He tried to figure it out on his own and ask other people about it. He had to figure out how to pay himself, how the HR payment system works, and much more. A year later, he talked to investors trying to raise capital. He goes through the customer operations. He tries to do his best to fulfill his duties and responsibilities.

[49:50] To balance and handle everything, Chris must identify which areas are to focus on. Currently, they are at the stage where they are trying to drive customer acquisition, retention, and payment volume revenue.

Challenges in Talking to Employees and Executives

[54:09] Deciding on a decision that will lead to the company’s direction is one of Chris’ struggles. He struggles to make that decision as it seems like everyone is just waiting for him to fail. Some people will praise you if you’re right and degrade you if you’re wrong.

What Chris Wished He Had Known Earlier

[59:48] Christ hoped that somebody could tell him how hard it is to establish a business from scratch. He shared that it is crazy starting up a company. You have to believe in yourself and with what you’re doing. You need to be patient of many things. You must also treat your investors as a family. Although if he had known this earlier, he wouldn’t be here having a company of his own.

Advice for other Founders

[1:02:02] You must surround yourself with good people as they are the ones who will support you all throughout. Investors will pinch in their ideas from time to time, but the higher ups will still make the decision.

Check out Azibo’s website https://azibo.com/ and on the following socials: