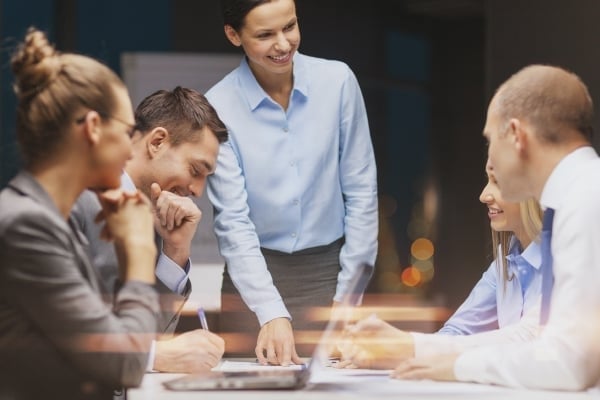 How to scale your leadership

“It’s almost surreal” Jeremy said to me when I walked into his office. He had been promoted from running a business unit of 800 to a division of 3500 of a large wireless communications company.

Jeremy had only been with the company for 2 years. He was a quiet, thoughtful leader – accessible and quite funny, but not the most outgoing person.

“I know I’m ready for this challenge….but it *is* a challenge. I’m barely getting to know my new team and my new products, and there are a few fires that I have to put out immediately. I have one entire group that is near mutiny from something that happened a few months ago I don’t actually understand. Another team is pushing me for a decision on a product I’ve never even heard of. I would say that this is going to be a push.”

Getting promoted to a much larger role is exciting, but it can also feel chaotic. You have to scale your leadership style. Fast. The way to do this is to focus on the foundation: 1) Set the big picture; 2) Scale your communication style; 3) Re-shape your network.

As you gain experience in leading large groups, you come to realize that vision, culture and values are not just touchy-feely words we coachy types make up. These attributes set the big picture. The business results of your team knowing and buying-into the big picture – or lack of results when they don’t – become apparent quickly.

There is a reason for this: It’s simply not easy to get large groups of people lined up behind you solving hard problems with the dedication and focus you need from them if they are not part of something larger. The promise of a paycheck only gets you so far.

As we talked, Jeremy realized how important this was for his team in particular. The reorganization that had gotten him promoted had caused a lot of disruption. Several groups had been dismantled and then merged into other teams; some people had been demoted; many people’s roles had changed. Even though things had settled down, there was still an uneasy feeling. “People feel like some of these groups got smashed together and I can tell they are either skeptical or confused or both. I see that I need to do a better job defining a more cohesive picture that they can all start to buy-in to.”

Jeremy called his direct staff together to discuss this. As they talked, they realized they each had a slightly different view of the vision. And none of them could really articulate the culture they wanted to build. No wonder there was confusion in the ranks!

In that meeting and a few others, Jeremy and his staff articulated the big picture of “where they were going” and the cultural values they wanted to emphasize in their division. They each went back and discussed them with their individual teams. When the staff followed up with each other they all agreed that just this starting point was very grounding for their teams. They immediately saw more calm and clarity, and people began to work together with less friction.

When you’re the leader, the biggest tool you have to move large groups of people is the way you communicate.

As Jeremy’s staff had spoken about the big picture, Jeremy realized that he needed a simple, unifying message. He was used to thinking about each of the products as a separate unit, but to step up a level he needed a theme that would encompass all of them and demonstrate how they fit together.

This was hard work and there were a lot of failed attempts before he came up with an idea that stuck. He bounced it off his direct staff who liked it and picked it up, and before too long he – and the team – had a rallying cry for the division that could grab their attention and serve as a point of focus.

He also re-thought his somewhat ad hoc way of communicating. That had worked pretty well with 800 people; not so much with 3500. He was already in a regular rhythm of 1-1s with his directs and staff meetings as a team – that worked. He saw, though, that if he didn’t pull together the entire organization periodically, some of them would possibly go a year or even more without seeing him or hearing from him. That was not going to work if he wanted to make sure he was transmitting culture and values personally. He worked with his staff to plan quarterly all-hands meetings.

In the day-to-day fire fighting of a new job – especially a big job – you may forget that the people around you are critical to your success. When you get promoted into a bigger job, you are the “new kid.” There may be tight alliances around you that help groups get things done and you are the outsider. Or there may be “bad blood” between some of your new peers and cross-functional colleagues. No matter what you need to establish yourself on the same footing as your new peers and make sure you build solid relationships with them.

To accomplish this, think about who are the right people around you to build relationships with.Find a colleague who will help you identify the top 10-30 people you need to build strong relationships with and make a plan to make progress quarter by quarter.

Jeremy discussed this with two trusted colleagues – both peers. One had been with the company a long time and knew the history, and one who was pretty new himself and so had fresh eyes. He compared notes with both of them. He put together a “stakeholder map” of the most important people to build relationships with as a starting point and found ways to reach out to them.

When you get a big-step promotion – and you will! – remember to set the big picture, scale your communication, and re-shape your network. I would love to hear from you! Send me an email to let me know some of the techniques that you’ve use!